If you feel good about who you are inside, it will radiate.

Patti Smith
This seventh edition was built around the theme of pleasure, of body and mind, of senses as a fundamental instrument to know the world.
After the upturns of the previous months, pleasure is reconfirmed as a practice which is precious to train: to get used to meeting again, to the closeness between bodies, to create a necessary community of solidarity in the interweaving of age, sexes, genders, backgrounds, skills and social classes.
For this reason, we decided not to cancel the Festival which was scheduled in May 2020, but to turn it into two acts: the first from August 4th to 8th, the second from November 5th to 8th.
We want to recover the pleasure for small things, which can become the revolutionary act to reflect upon our limits and boundaries, to increase joy understood as Gilles Deleuze defined it: cultural, political, social “power to act”.
Let’s restart from here: from the Festival and with you.

ORLANDO is an international queer festival that features cinema, dance and theatre. It is addressed towards a broad, varied audience and characterized by its ironic, inclusive and welcoming approach.

Our aim is to experience culture, overcome borders by broadening possibilities of expression and knowledge through multiple visions of reality. We want to raise a generation that is more liberated, and dream of a society that is more sensitive to equal opportunities, minority rights, gender violence and widen the possibilities of expression. We want a society that is brave and willing to explore otherness.

During the course of nine days we bring valuable artistic experiences to Bergamo by transforming the city through a rich programme of films, shows, encounters, workshops and events thanks to our network of relations, cultural exchanges as well as national and international partnerships.

The Festival and the association are named after Virginia Woolf’s novel. Her work clearly proves how cultural, gender, ethnic and affective orientation differences are indispensable to establish a cultural identity that is plural, alive and constantly transforming. 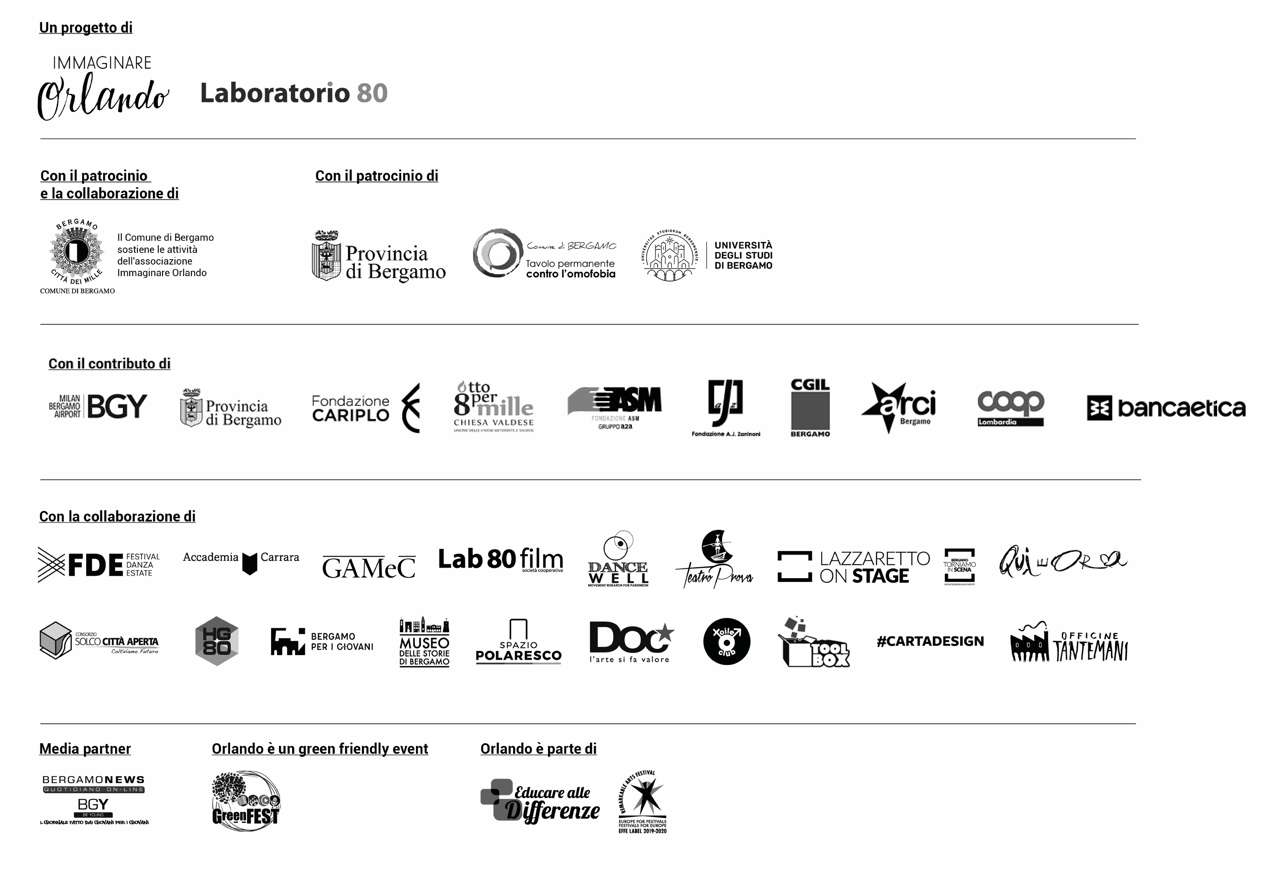 ORLANDO DREAMS GREEN
Pleasure is a Human Right. Be the pleasure. Be right.
Thanks to the European project Green Fest, the Municipality of Bergamo has defined the parameters of environmental sustainability for cultural events in our city and, along with Anci Lombardia, it promotes the Green Friendly Event label. From the 2020 edition, we will join the initiative as an active player towards building an eco-sustainable future, which will be able to improve people’s quality of life. We will contribute through small practices:
-          We will be choosing locations accessible by public transport;
-           We are trying to reduce the use of paper in favour of digital;
-           We are proposing gadgets with low environmental impact;
-           We will be offering Zero Km buffet
...This and much more is necessary to set a change in motion.
NETWORK
EFFE Festivals for Europe, Europe for Festivals
The EFFE Label  is Europe’s quality stamp for remarkable arts festivals showing their engagement in the field of the arts, community involvement and international openness.
These festivals are deeply-rooted in the European artistic, cultural and social reality as well as:
Coordination activities of Italian LGBTQ film festivals
In 2018, a Coordination of Italian LGBTQ film festivals was established. For the first time, in a thirty-year cultural history, nine national festivals in the sector have decided to work alongside to jointly design mutual support actions, to be developed through the network in the near future. An unprecedented Coordination Board in Italy, able to develop shared objectives and projects, while maintaining the autonomy of the subjects that are part of it.   The festivals that have joined the Coordination Board to date are:
Bari International Gender Film Festival – Bari | Florence Queer Festival – Firenze | Gender Bender – Bologna | Festival Mix Milano – Milano | Immaginaria International Film Festival of Lesbians & Other Rebellious Women  – Roma | Orlando Identità Relazioni Possibilità – Bergamo | Sardinia Queer Film Festival – Cagliari | Sicilia Queer filmfest – Palermo | Some Prefer Cake Bologna Lesbian Film Festival – Bologna
They are entities and organizations with different stories and background. However, they share a vision of cultural action and a constant commitment to ensuring that film culture continues to be enriched with stories. The events and characters of that diverse world which revolves around differences linked to sexual orientation and gender identity. Over the years this process has been able to confront the changes of society by broadening its gaze towards new cinematographic territories, expressions of heterodox positions, the transversal, the unconventional as well as new forms of poetics and language.
The Coordinating Board’s Festivals feel the need to reflect together on these changes, in order to lay the foundations of a new project for the future and be more effective in finding possible answers to the needs of our communities and new audiences, as well as those of all the directors involved in the entire system of film production and distribution.
Do you need further information?
Please get in touch if you have any questions about our association, Orlando Festival or our educational projects
Ask for information